As guests of the NHL, Titans spend time with 2018 gold medalist 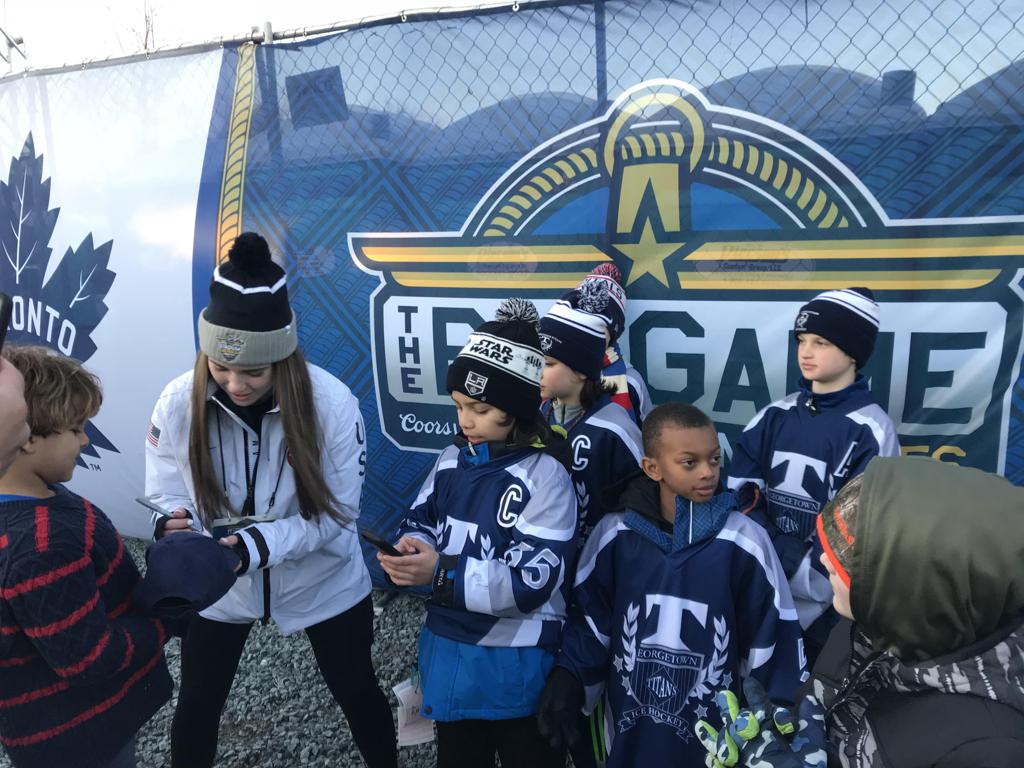 Titan players got a major bonus when they attended the Caps game as guests of the NHL this week: They got to meet and chat with Maddie Rooney, goalie for the 2018 women’s gold-medal Olympic hockey team.

Rooney is a force, playing for the University of Minnesota before joining the U.S. Women’s National Team, which took gold—the first in 20 years for the U.S.—after beating the Canadian national team in South Korea.

Rooney signed autographs, posed for photos and talked with Titans players before the Titans settled in to watch the Caps play the Maple Leafs. Perhaps most important, Rooney talked with Titan Leopold Hylton and Hagerstown Bulldog Kaiden Whaley, the two players who made national news earlier this year.

With a goalie out due to sickness, Hylton stepped into the net with no experience to allow the Titans to play. After a rough first period, Whaley crossed the ice unprompted to give his opponent a goalie lesson. The moment caught the eye of The Washington Post. ESPN named Whaley the Best Player in the World that week. And the the National Hockey League notice, too.

The Titans were at the game became the NHL invited 16 players to see the Capitals play the Maple Leafs at the Stadium Series March 3, which was played outdoors at the Navy-Marine Corps Memorial Stadium in Annapolis.

As guests of the NHL, the Titans, their coaches and their team manager met Rooney, watched the action, took some photos and reflected on a terrific season as it comes to a close, and many Titans players look forward to Notre Dame Hockey Camp this summer.

Of course, there were many great things about this year’s Titans season. The Titans roster was the largest ever, and we increased scholarships by 57 percent.  We were able to double the amount of ice time over last season. We received our first grant, and used it to host our first Try Hockey for Free event, which drew more than 45 participants—50 percent more than anticipated.

In January, we launched our first formal fundraising campaign, which is designed to help five scholarship players get to Notre Dame Hockey Camp this summer. The goal is $5,000 and we just crossed the halfway point (help us get there -- every dollar counts!)

Thanks to the NHL

The NHL’s kind invitation allowing our Titans squirts to meet Rooney and see the Stadium Series is one more example of Titans interacting in the community. Our players volunteered on MLK Day. They collected 100 pounds of canned goods for the holiday food drive. They hosted a women’s basketball team from Chicago—go Cheetahs!—and showed them around Washington (and the Titans will visit them this summer). Most important, the Titans played with a positive attitude and strong sportsmanship all season long.

A hearty thanks to the NHL, the Caps, to Rooney and to the women’s 2018 gold-medal hockey team for showing our Titans the definition of grace, generosity and the positive power of sports to bring all of us together.